One of the first things you see when you hit the tarmac at McCarran airport is the sheer, golden sheen of the Mandalay Bay hotel, looming over the jet black pyramid of the Luxor.

Normally I would have my sketchbook out, desperately putting down some lines, but right then, it’s too sobering. It would be impossible to be here without mentioning and feeling for the people involved in, and impacted by the recent mass shooting.

Over the next week, I’ll try to capture Vegas as I see it.

I circle through sprawling, dim lit Casinos and out into the blinding sunshine, face to two face with two women in leather hot pants, brandishing whips. It’s pretty clear that life in Sin City, goes on.

I start with Paris, which I last sketched in the flesh in 2014. Midway, a couple ask me to take their picture. I do. 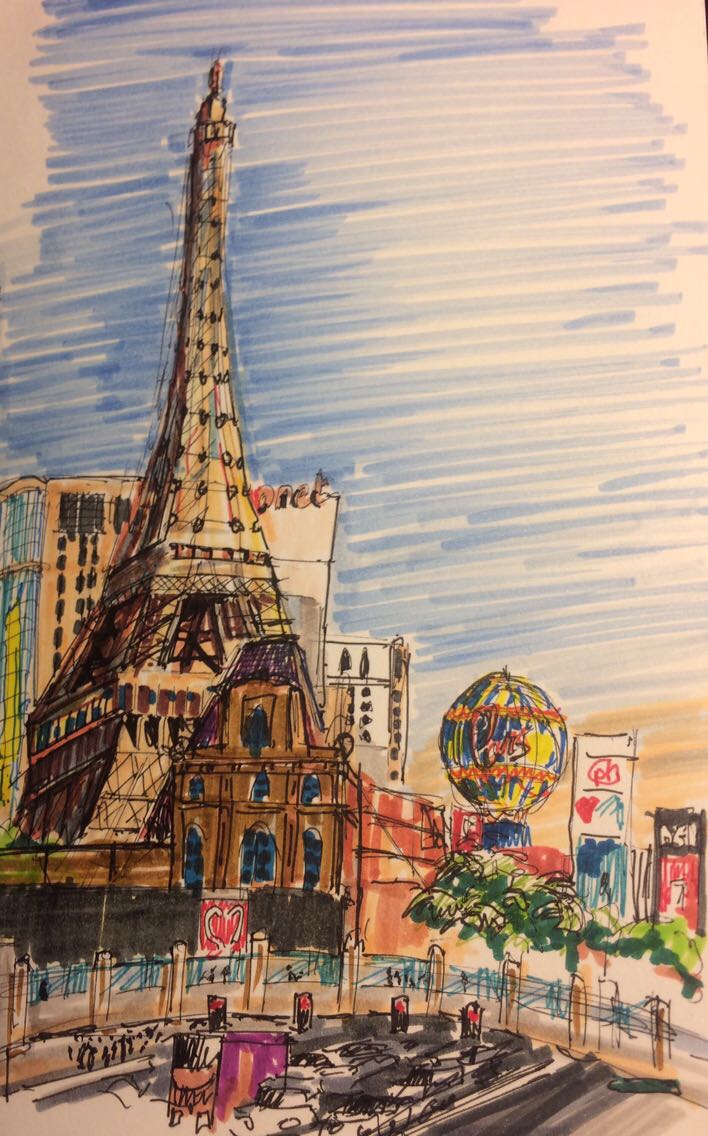 Then on to the Bellagio fountains, where Fleetwood Mac and Phil Collins pound out to a techno beat.

The fountains spring into action to the tune of ‘Gad bless Amer-i-caw’ and I have 15 minutes to sketch them.

Midway, a man asks if he can take a picture. Now this is not unusual. I stood sketching at the top of Gornergrat mountain in Switzerland, whilst literally, a train load of tourists shoved long lensed cameras between me and my page, some ruthlessly diving in, others smiling and gesticulating thanks. I don’t usually mind and if someone asks, I usually let them, but my body thinks it’s 1:30am, I’m tired, and I don’t fancy it. ‘I’d rather you didn’t’ I say politely, he tries again, I say the same. He walks around the other side of me and tries again (bear in mind I have only 15 minutes) ‘no’ I say, ‘but it’s for me’ he says. I raise an eyebrow and carry on sketching.

It’s 7pm in Vegas, but my body thinks it’s 3am. I’m standing alone on the strip in Las Vegas, sketching the iconic Flamingo. Midway, a man asks me if I might have any idea where the Uber pick up point is. It’s time to sleep.